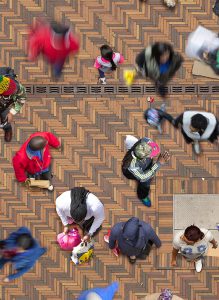 Katrin Korfmann’s work is on the cutting edge of photography, film and installation. In her work, she creates a tension between stillness and movement, and partly because of that her work shows a strong affinity with performance. Korfmann is attracted to the spectacles of everyday life that usually take place in the public space. By capturing people in motion, she forms a new perspective on busy urban settings as portraits of contemporary transitions.

In her oeuvre, Korfmann incorporates a critical attitude towards the world around her, explicitly with regards to contemporary visual culture. She investigates a multitude of images, their historical and current manifestations and the resulting social and visual effects. She places her world of experience outside of herself, abstracting it and playing with it to get a better “view” of it. Her photographs are both an image of reality and of
collective social memory. A frequently recurring element in her photographs and installations is the monochromatic backdrop, which she refers to as ‘space zero’. The space zero is a solid-coloured surface, like a canvas or a backdrop in a photography studio, ready to capture the play that is set to begin. The bird’s-eye view often used by Korfmann allows her to create images that are free from direct references to architecture, specific locations or cultural backgrounds.

The work ‘Anton de Komplein’ will be shown during Big Art 2019, and was presented by Korfmann at CBK Zuidoost in 2018 to mark the 50th anniversary of the Bijlmer in Amsterdam-Zuidoost. The Anton de Komplein a square named after the Surinamese writer and resistance fighter – was used as a location for the event ‘Ode aan de Bijlmer’ (Ode to the Bijlmer). The work stems from the source material that Korfmann photographed during the realisation of a commission for the new Judicial Complex Zaanstad, for which she observed four different squares in Amsterdam from above. By using countless versions of the Anton de Komplein and combining them into one fictional image, she created her own version of this square, independent of time and events.